Monday morning started by wrapping up the Bootstrap Learning paper. Even after combing through the sections on interpreting relevance and the strategy for converting to ILP, I wasn’t completely sold on how it worked, though the paper made frequent allusions to the code.

At 11:30am Kaushik and I talked through the next few steps in the pipeline, which included the two of us going through the files and discussing the important aspects of each.

As a side note, we thought that the RDN-boost code might benefit from having a visual output for the trees, at least more so than the text documents.  There is an output folder called dotFiles (RDN-Boost/data/train/models/bRDNs/dotFiles/) that contains a fairly human-readable output of the tree structure, which looks similar to an XML/JSON output.  We suspect that parsing the documents with some kind of graph-visualization tool wouldn’t be too hard. Since we’re attempting to make the boosting code user-friendly during the hackathons, having human-readable outputs for the learned trees might be helpful.

Minutes from our lab meeting:

Hackathon started promptly after our meeting.

Phillip, Kaushik and I spent some time talking about how to work with data, types, predicates, and modes.  After some whiteboarding we concluded that it was an interesting problem that would be difficult to generalize. A good place to focus would be on the background.txt file where the modes and bridges were set for RDN-boost. 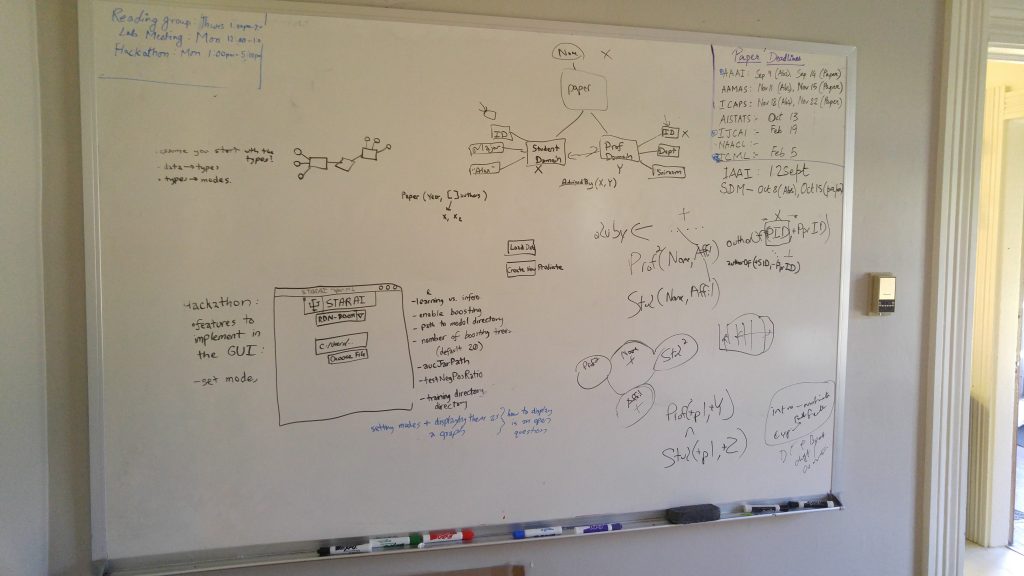 After about fifteen minutes of brainstorming between the three of us, we concluded that setting modes automatically would be difficult at best. Assisting the user would most likely be done when creating predicates.  In this example, we considered a dataset of students and professors with relations describing them.  Predicates are created by setting modes, then RDN-boost finds the walks between the relations.

I spent some time on a bash script that could generated all of the types given a dataset in the form of a facts file.

In this case we return:

However, this solution assumes that the data is already in a certain format to begin with. A general solution that could work for different datasets is still unsolved. Furthermore, setting the modes and what each type refers to is still unsolved.

I have a lot of problem solving left.

As someone who never misses class, I’m regretting not being able to attend Professor’s full lecture. I have gaps in my knowledge.  We discussed decision trees: mutual information, entropy, advantages of discrete features (and domain experts), fitting/overfitting, and ID3.

After reviewing our progress, Homa and Patrick want us to run the pipeline on docs800. Following is an overview of that process.

The code works beautifully even with the blatant inefficiencies.  When we package the software Kaushik and I will condense a couple of these steps and make it so an input can be specified (i.e. input directory, primary/secondary).

We ran the full pipeline for the secondary shares, producing strong results.  There is an indexing problem in makeResults.py that prevents some the returns from being displayed correctly, for now the list was short enough to fix by hand.  Kaushik started the pipeline for primary shares.

Phillip gave a practice talk (a practice talk for his Friday practice talk rather) on “Actively Interacting with Experts: Probabilistic Logic Approach.”  Professor reminded us as a lab what we needed to focus on when writing papers. 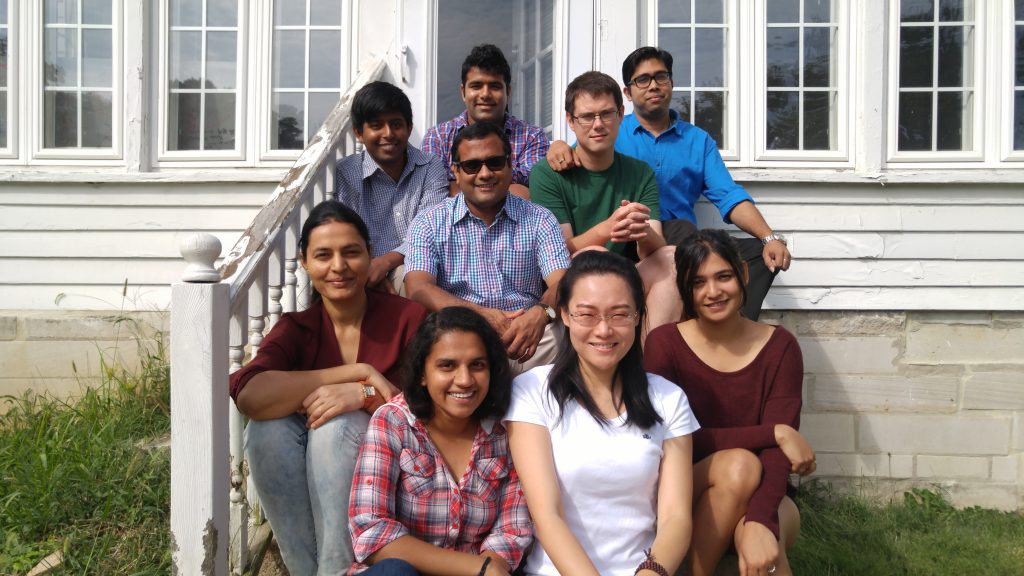 Phillip started our morning with the polished version of the practice talk he gave on Wednesday.  Lab picture day was immediately after (I took the first photo, I’ll be in a separate one or we’ll get someone to take a full group photo).

My next step is to write an interface and automatically run strip.sh (or something equivalent) on the files before extractFinancialLines.py.

Kaushik and I did some preparation for our presentation on Monday, I’ll put some finishing touches on it Monday morning.