Here’s a few summaries of papers I read for tonight’s homework:

In this paper, the author presents a k-anonymity protection model and explored related attacks. In addition, he provided ways in which these attacks can be thwarted. He introduces his paper by stating that as society is experiencing exponentially large growth in the number of data collections containing specific, personally information in computer technology, that network connectivity and disk storage space has become increasingly affordable. Data holders, who hold this large collection of private data, often have a difficult task of releasing information that is too person-specific and that does not compromise privacy. The author introduces a model in which data holders with limited knowledge can release their data without the fear of subjects being later re-identified. This formal protection model called k-anonymity also includes a set of policies when data is deployed, which grants protection if the information for each person contained in the release cannot be distinguished from at least k-1 individuals. This model is important because it forms the basis on which similar real-world systems provide guarantees of privacy protection.

The goal of the author’s work was to create an understanding of what uniqueness means and how it can lead to an increase of vulnerability in highly sensitive datasets such as those in the Kinsey Institute. As social scientists collect highly sensitive data from surveys done at the Kinsey Institute for Research in Sex, Gender, and Reproduction. Unlike medical data that features nothing but pure medical-related data, these datasets present an opportunity to take data and characterize participants in unique ways. These unique characteristics can allow individuals who have taken part in the study to be linked to other sets of external data and ultimately be identified. Therefore, when dealing with such sensitive data, traditional approaches to anonymizing data may not be enough to prevent the re-identification of participants in these datasets. Privacy is key to social science researchers because they depend on participants to provide truthful, accurate, and highly personal answers regarding their own behaviors. In this paper, the author evaluates two datasets to enhance the understanding of behavioral and psychosocial factors related to the risk for HIV and other sexually transmitted infections and risks to the individual’s well-being. Because the data focuses on sexuality, it is considered to be sensitive data that requires both the protection of confidentiality and privacy.In this paper, the author evaluates the statistical characteristics of these datasets in order to understand just how these “unique characteristics” of individuals in the data impacts their privacy in studies. They do this by using statistical attacks in an attempt to achieve the re-identification of participants. They analyzed the dataset from a sexual health survey, and characterized uniqueness and the sparsity of records. They also introduced a uniqueness similarity measure that helped to add further characteristics. The results of their data showed that uniquification rates for the data was extremely high – for example when considering combinations of 3 attributes, the percentage of unique records approaches 100%. Also, they discovered that participants with similar backgrounds provide similar answers to questions referring to sexual behavior and psychological state. (Dataset 1). Results in Dataset 2 were taken from participants with different backgrounds, therefore they had answers that were predictably more unique and less similar. They concluded that participants in a sample drawn from a more diverse population are exposed to greater privacy risks.

Common Pitfalls in Writing about Security and Privacy: Human Subject Experiments, and How to Avoid Them

As this paper was more a list of things to be careful of when writing an academic paper that deals with human subject experiments and their security/privacy, I made a summary in a list-like approach.

Today was a change of pace, as instead of listening to a lecture back to back we got to explore and play around with paper circuits and soldering, 3D printing, and laser cutting. I was nervous about the paper circuits because it made me think about high school physics all over again, but really the concept is quite simple – the flow of electricity goes from positive to negative, and is able to light an LED light as it uses the copper tape as a conductor to flow from the positive side of the battery to the negative side. The homework was a bit more challenging as we had to create two more circuits. I chose to make a switch and a pull tab. 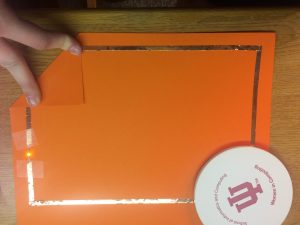 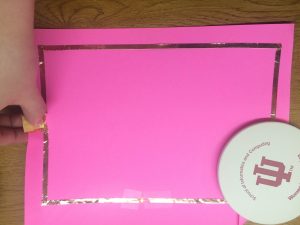 It was hard to hold down the battery and switch or battery and pull tab at the same time so I made use of this handy dandy coaster to hold down my battery, and waaalahhh! Paper circuit magic.

When we were introduced to the 3D printers, I pulled up a little object I drew on tinkercad.com Tuesday night. My little brother Luke is 12 years old and has already 3D printed me an IU logo, so i decided to print him off something too.

It’s really tiny, but I’m proud of it.

Today’s lectures were really helpful – especially the one on Related Works. I liked getting feedback, although I think my issue is writing too much instead of too little. I just really like reading the papers and everything sounds so interesting and important to me!

Here I chose an article I read last week to work on citation trees, and added these forward and backward citations to my Mendeley to read when I have some down time: