Here is a summary of A Craft Approach to Health Awareness in Children:
In this paper, the authors attempted to tackle the increasing risk of health problems in children due to inactivity and poor dietary choices by creating a computational toolkit that combined both craft and health. By interviewing children ages 10-18 about what habits they thought were healthy to their way of life, authors developed a wearable device that could track the specific metrics each child deemed important. Through the use of a micro-controller base, UV sensor module for tracking time spent outside, and a button for manually tracking their habits, the wearable device extracted information and presented it to the child through a module they individually crafted to visualize their own health data. The authors decided to use crafting because children require a different way of thinking about health technology, and since crafting is already such a part of a child’s culture, it was thought to provide them with a sense of control over their environment. After two discussions that idealized a design of the technology and a month of prototype development,  children evaluated the systems they created by taking the wearable home with them but leaving the visualizations at the clubhouse on an electronic mural that featured all the children’s ambient molecules on display. According to results, this crafting perspective on health technology was received positively by the children – as a great deal of social interaction centered around the mural was observed as participants would often be motivated by simply being able to visually see each other’s work. Authors also mentioned a finding similar to the “Ikea Effect” when they mentioned the observation that those who spent more time crafting their wearable generally seemed to use it more than those who did not. Using this study, it is possible that crafts could facilitate healthier thinking and the start of healthier choices in children’s lives. However, as only two participants in this study chose activities that were diet related, my concern for this study is that the activities chosen by students did not necessarily apply to health. For example, many children chose drawing or reading – which authors argued could also be beneficial for mental health. Overall, authors end the article with how they saw crafting as a child-friendly and creative way to introduce serious health topics and possibly a gateway to more health-related issues.

My personal thoughts on the paper:

As I honestly do not see the activities the children chose as “health-related,” I definitely agree with the concept that children need to be introduced to serious health topics in a more “child-friendly” way, which may ultimately be crafting. I think that more research should be done in order to find out which method of relaying health information to children about health works best so that healthy habits can be developed early on in life. More research should investigate other methods while actually applying health information rather than letting children pick activities they deemed healthy as well, as the increase of their chosen activities may have simply increased because they were familiar with them or really liked completing them. For example, a child who’s always loved drawing may have just wanted to draw more (which would be easy to do for a child who loves drawing). On the other hand, a child who despises running but wants to increase the amount of running they do may have a harder time completing it because they barely ran before and do not enjoy it as much as drawing. Overall, I think this research is applicable when it comes to what children really think of health and how other researchers should approach the concept of clearly conveying health information in a more child-friendly way. On the other hand, I believe more research is necessary to figure out which child-friendly method works best to actually facilitate and produce healthy behaviors (physical activity and diet) in children.

After today’s discussion, I’m only more excited to expand my knowledge about research. I did feel a little overwhelmed when I saw the schedule of how our week would go and I honestly thought to myself that the amount of coffee I will most likely consume the next ten weeks is probably not good for my health at all. However, I feel that after these next ten weeks I’ll not only walk away with an enhanced knowledge when it comes to the various amounts of things researchers should be able to do, but also a preparedness and disciplined way of approaching my research from this point on.

So I made a list of things I’m excited to learn more about in this REU program:

As I have already read a considerate amount of research articles, I have found Mendeley to be the best citation manager option for me. I have used it before quite frequently but I do need to start inputting the summaries I have written (that are stored in documents some other place) for them to be able to manage the articles in a more efficient manner – especially as I find myself reading more and more papers.

On a less academic note, today may have been stressful and a tad overwhelming at times but my new roommates and I found the time to venture downtown to Kirkwood and get some good food  🙂 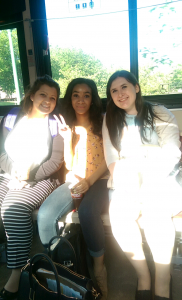