The second week of my REU summer program went a lot smoother than the first. I’ve gained the basic understanding of how the lilypad and arduino function.

This week I worked a lot mainly with the lilypad buzzer, RGB LED, and the white LED lights. Using the buzzer, I created a code that makes the buzzer play the theme song to one of my favorite series, Harry Potter. If you don’t already have the sheet music or cannot find the music for free online, the most difficult part about making music would be finding the correct notes in the song and the value of how long each note should be held. Fortunately I was able to find the sheet music online for free. After finding the notes and programming the frequencies into Arduino, the next challenge was finding how many milliseconds each note should be held so that the song sounds like the actual song. If the notes were held for too long, the tempo of the song would be very slow and if the notes weren’t held long enough the tempo would be too fast. It didn’t take too long to determine how long each note should be held to achieve the desired tempo. The end result sounds very similar if not exactly like the Harry Potter theme song and I am very proud of it! After the music portion of this project was completed, I decided to create a simple light show that goes along with the song using white LED lights. At first I had a bit of a hard time because the lights wouldn’t blink, they just stayed on throughout the whole song. I eventually figured out that I had to program the light to turn off when I wanted it off and then program it to turn it back on when I want it on to get it to blink.

Another project that I completed this week was programming the lilypad buzzer to play Notre Dame University’s fight song. Luckily I already had the sheet music from playing the song in High School. This project took a lot longer than the Harry Potter song just because the song has about three times as many notes, however the task was more tedious than difficult. After finishing the song, I decided to use the RGB LED light to make a light show. The first thing I did was create three different codes that caused the RGB light to turn 3 colors : green, gold, and blue. Then I started plugging the code into my loop to make it flash these three colors as the notes changed. After getting about halfway done with plugging in the RGB code into my song, I realized that the code was getting very long and that I would eventually hit the bottom of the page before finishing. So I then decided to use the subroutine blocks to shorten my code, which was a much more efficient method to save space and time. The code I produced worked exactly the way I had anticipated it to, and the light show and song look and sound pretty amazing! 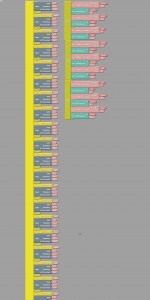 This week my main goal is to find sheet music to songs that would be popular to girl scouts for the camp coming up in July. Probably a few songs by Taylor Swift, Katy Perry, One Direction, etc… Furthermore, I want to focus more on learning about 3D printing and laser cutting because these are two completely new subjects for me. Lastly, I need to work on my sewing a bit more and narrow down some ideas for my arduino project that I want to make. I’ll update you on my progress in next weeks blog! – John