We set up a series of resistors, LED’s, and a 5V charge to make the 8 LED’s illuminate in sequence. The Ardublocks program allowed us to set the delay time in which the series of LED’s would illuminate. 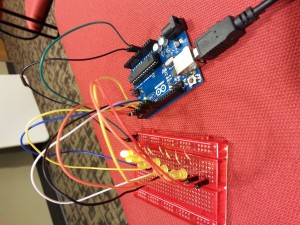 Below is a Youtube link to our finished product:
http://youtu.be/fc_Y6NHtxn4

Circuit 5:
We set up two buttons to one red LED. once one of the buttons were pressed the LED would turn on. Letting go of the pressed button would turn the LED off. 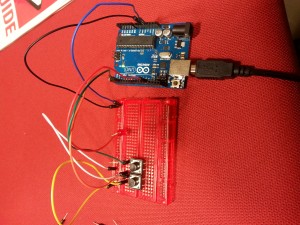 We could only get one button to function and had a few questions as to;